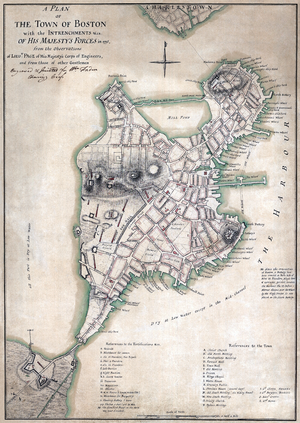 By the 1770s Americans focused on their rights as Englishmen, especially the principle of “No Taxation without Representation,” as articulated by James Otis, Samuel Adams and other Boston firebrands. Boston played the primary role in sparking both the American Revolution and the ensuing American Revolutionary War.

The Boston Massacre came on March 5, 1770, when British soldiers stationed fired into a rioting mob on King Street outside the British custom house, resulting in the deaths of five civilians and dramatically escalating tensions. Parliament, meanwhile, insisted on its right to tax the Americans and finally came up with a small tax on tea.

Up and down the 13 colonies, Americans prevented merchants from selling the tea, but a shipment arrived in Boston Harbor. Local Sons of Liberty, disguised as Indians, dumped the tea in the harbor in the Boston Tea Party. The British government retaliated with a series of very harsh laws, they closed down the Port of Boston and stripped Massachusetts of its self-government. The other colonies rallied in solidarity behind Massachusetts, setting up the First Continental Congress, and arming and training their militia units. The British sent more troops to Boston, and made its commander General Thomas Gage the governor. When Gage discovered the Patriots had set up a shadow government based in the town of Concord, he sent troops to break it up. Paul Revere, William Dawes, and Dr. Samuel Prescott made their famous midnight rides to alert the Minutemen in the surrounding towns, who fought the resulting Battle of Lexington and Concord in April 1775. It was the first battle of the American Revolution.

Militia units across New England rallied to the defense of Boston, and Congress sent in General George Washington to take command. The British were trapped in the city, and suffered very heavy losses in their victory at the Battle of Bunker Hill; Washington brought in artillery and forced the British out as the patriots took full control of Boston. The American victory on March 17, 1776, is celebrated as Evacuation Day. The city has preserved and celebrated its revolutionary past, from the harboring of the USS Constitution to the many famous sites along the Freedom Trail.