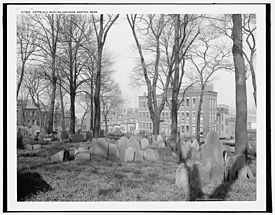 Early colonists believed that Boston was a community with a special covenant with God, as captured in Winthrop’s “City upon a Hill” metaphor. This influenced every facet of Boston life, and made it imperative that colonists legislate morality as well as enforce marriage, church attendance, education in the Word of God, and the persecution of sinners. These values molded an extremely stable and well-structured society in Boston. Puritan values of hard work, moral uprightness, and education remain a part of Boston’s culture. The first school in America, Boston Latin School (1635), and the first college in America, Harvard College (1636), were founded shortly after Boston’s European settlement.

Boston’s Puritans looked askance at unorthodox religious ideas, and exiled or punished dissenters. Baptist minister Obadiah Holmes was imprisoned and publicly whipped in 1651 because of his religion and Henry Dunster, the first president of Harvard College during the 1640s-50s, was persecuted for espousing Baptist beliefs. By 1679, Boston Baptists were bold enough to open their own meetinghouse, which was promptly closed by colonial authorities. Expansion and innovation in practice and worship characterized the early Baptists despite the restrictions on their religious liberty. On June 1, 1660, Mary Dyer was hanged on Boston Common for repeatedly defying a law banning Quakers from proselytizing in the colony.

The Boston Post Road connected the city to New York and the major settlements in Central and Western Massachusetts. The lower route ran near present-day U.S. 1 via Providence, Rhode Island. The upper route, laid out in 1673, left via Boston Neck and followed present-day U.S. Route 20 until around Shrewsbury, Massachusetts. It continued through Worcester, Springfield, and New Haven, Connecticut.

In 1755, Boston endured the largest earthquake ever to hit the Northeastern United States, (estimated at 6.0 to 6.3 on the Richter scale), called the Cape Ann Earthquake.